Ten of us met at Houton on a dry but misty day to get the Ferry .The mist hadn't got as far as Lyness which was sunny .Barbara immediately suggested looking at the Air Raid Shelter there. Did she know something that we didn't ? Luckily she didn't and we followed the long concrete passages imagining what it would have been like to be hiding there in the 1940's . It still has signs in it from the last war .

The three cars then set off individually to explore their own photographic opportunities on the way to Rackwick before a meet up for lunch .First up was the Military Cemetery ,wonderfully kept but with such sad headstones of Sailors in their late teens and early twenties as well as the inevitable graves of those who could not be identified .A peaceful sunny place when we were there but a monument to the anguish of War.

Further on we stopped at Pegal Burn to photograph the Bridge but there was little water in the burn itself .Going further north the mist thickened and made it difficult to see the Red Throated Divers on the Loch by Betty Corrigal's Grave . Rackwick had low cloud and mist around the cliffs but the occasional flash of sunshine .Lots of photographs of old buildings and the view as the tide was out .Lunch was taken overlooking the beach and then most went down past the Bothy to the southern end of the beach .One member of the party ,who was well organized, had a swim and photographed herself while doing so for good measure .I don't think this idea will catch on as a regular Group activity ! Then off back to Lyness, which was still in sunshine, via the Fea View point and the view was excellent . A terrific day out which had defied the forecasts of rain /drizzle .

The next project is "Blue " .The next outing will be on the Mainland and details will follow . 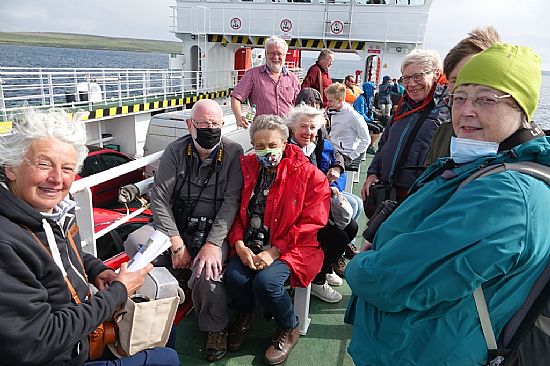 Please note that whenever you submit something which may be publicly shown on a website you should take care not to make any statements which could be considered defamatory to any person or organisation.
site map | cookie policy | privacy policy | accessibility statement