After three postponements due to gales and snow, we finally got out to walk. Waking up first thing did not look promising with snow overnight and ice on the roads. However by the time we had driven out to Finstown the snow and ice were gone so the heavy snow shower of the previous evening must have been very localized.

Nine of us met at the Rendal Cemetery to take fewer cars onward to the Doocot where there is restricted parking. Before going we paid a visit to Eddie Balfour's grave to view the stone engraved with nine Hen Harriers, his life time's work in the study of Birds. The Doocot was bathed in sun but we were unable to gain access to the inside which was just as well as the deep floor covering would have made very good fertilizer! We set off along the footpath down to the next little graveyard right alongside the shore. This has impressive stone pillars at the gate with dates upon them going back to the 17th Century. There is the remains of a ruined Chapel with resplendent lichen on it plus a weather beaten Bible in a niche in the stonework. Then onward up the hill and along back to our starting point via a detour down to the shore to look at the sunbathing seals. It was great to be out in no wind, dry and sunny weather after all the recent weather turmoil.

The next meeting will be Friday 18th March. Place and time to be arranged on Wednesday 16th March. 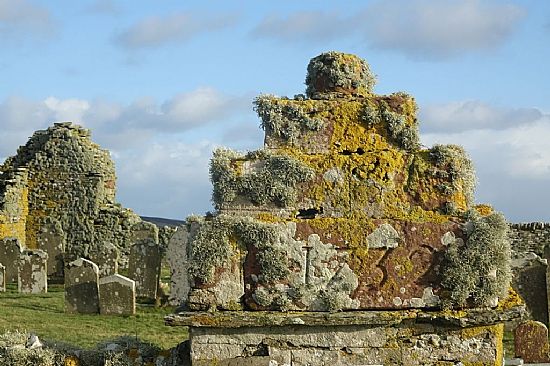