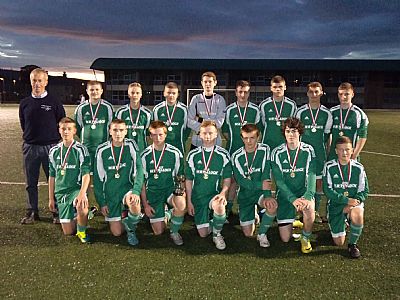 A cracking Under 15’s Maurice Walls Cup final tonight saw Thorfinn edge out Stromness 3-2 in an all action match that kept the crowd entertained from start to finish. Star of the match was Thorfinn’s Oskar Stout who scored a spectacular hat-trick – two cracking shots from distance and a further finish after a mazy run from the half way line. This was after Stromness had opened the scoring in the first couple of minutes through Callum Crawford before Oskar scored his three goals to give Thorfinn a 3-1 lead. Sam Hunter with a penalty pulled Stromness back into the match midway through the second half but Thorfinn held out for the victory. Congratulations to Thorfinn and well done to both sides for producing the best match of the Under 15 season.