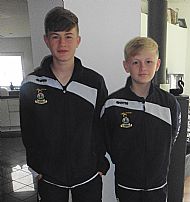 Well done to two of our young Orkney footballing stars, brothers Aidan and Jay Foubister, from Kirkwall who have just returned after a highly successful trip to Ireland’s premier youth football tournament – the Dublin Cup – with Inverness Caley Thistle.

A number of teams from all parts of the world participated in the round robin tournament, including teams from Norway, England, Ireland and the USA. Jay Foubister has played for ICT since he was 11 years old and is now an established player in the Under 15 squad playing centre midfield. The Under 15s did not lose a game during the tournament and after an exciting final match in which Jay scored the second goal, they secured victory with a 3-1 win making them winners of the Under 15 Dublin Cup 2016.

Aidan Foubister now aged 12 also joined the ICT squad as an 11 year old and played for the Caley Thistle Under 14 team in the Dublin Cup. He found his place in the squad at right wing in the tournament. Unfortunately, they were just finding their feet in the first game, and narrowly lost 2-1 in the final minute. However they upped their game and gained confidence and went on to win their next 5 games making them runners up for their age group and collecting the silver medals.

Both Jay and Aidan would like to sincerely thank their sponsors, Pentland Ferries for their continued assistance with travel to attend training, league games and tournaments - it would not be possible without their support. They would also like to thank Gorgeous Therapies for sponsoring their training tops, the Kirkwall Community Council for travel assistance and their OYDG coaches for their training and keeping them fit throughout the season so that they can play at this high level.