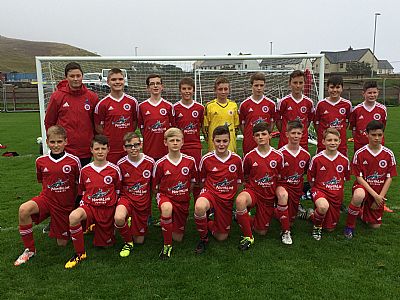 The Orkney Under-13’s travelled to Shetland on the weekend of 20th-22nd August and successfully defended the J W Thompson Memorial Trophy with an excellent 2-1 victory.

It was Dylan Cormack who was on hand to force the ball home from close range to give Orkney a deserved lead in the first half after Finn Hancock’s initial effort was parried by the Shetland keeper. Just as it looked as if Orkney would go into the break ahead, a lapse in concentration in the Orkney defence allowed Shetland to equalise with a low shot into the corner of the net.

Early in the second half Craig Harrison took advantage of some hesitation in the home defence to nip in and deftly flick the ball through the goalkeeper’s legs and into the net to put Orkney 2-1 ahead. The team played with a great degree of composure to see out the rest of the game and claim a well deserved victory. A stand-out performance at left back from Alexander Scott earned him the “man of the match” award from the Shetland coaches.