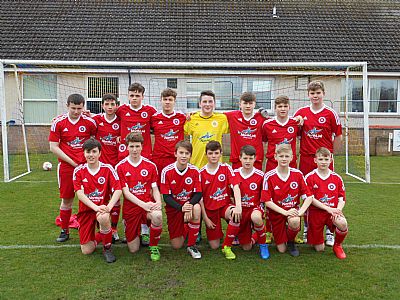 Orkney Under 15’s football squad travelled to Fife for two games last weekend. On Saturday they played against St Andrews Colts who are in the 2nd Division of the Tayside League. The hosts had lost only one league game thus far and a tight game was anticipated. A dominant performance saw Orkney emerge as 8-3 winners with goals from Gregor Dowell (3), Jay Foubister (2), Liam King, Craig Harrison and Aidan Foubister.

On Sunday morning, the boys travelled to the Kelty Hearts stadium to play Kirkcaldy team, Beveridge Red Lions. The hosts are having a good season in the 1st Division of the Fife Development League and they had also played the previous day, recording a 6-0 win. An even first half ended 1-1, with Jay Foubister scoring the Orkney goal. The physical presence of the home team showed in the second half and despite a good showing by Orkney they conceded 3 more goals in a 4-1 defeat.

In summing up the trip, Coach Ritchie Brunton thought that the players did extremely well and that they had performed to a really good standard. With two contrasting matches, the better all-round performance was considered to be in Sunday’s defeat. However, the weekend matches will hopefully stand them in good stead for the rest of the year and they look to improve in certain aspects of their game.  Thanks to the players for their conduct on the trip, the Fife clubs for providing the opposition and to Orkney Sea Cadets for the loan of their mini bus for the trip south.