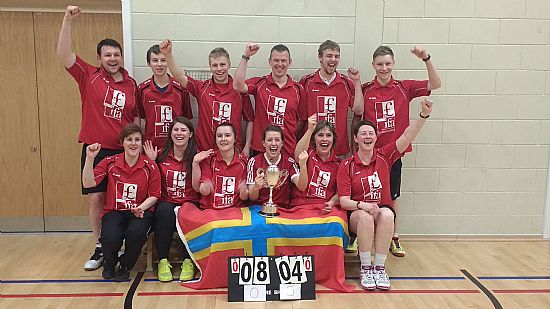 The Orkney team jubilant after the match!


Orkney hosted Shetland in the annual A Inter County match on Saturday 11th March. Orkney won the Inkster Cup at home two years ago, but were looking to get their hands on it again after losing in Shetland last year. The KGS was the venue with a good crowd of spectators eagerly awaiting the match. Orkney Badminton Association would like to express their thanks to Orkney Aggregates who were match sponsors.

3rd Mens Doubles - Magnus Wylie and Matthew Reid (O) beat Rory Irvine and Andrew Hunter (S) 21-13, 17-21, 21-17. The Orkney pairing got off to a great start taking the 1st set. They relaxed slightly too much in the 2nd set letting Shetland into the game who took advantage of Orkney lifting the shuttle and began to play a more attacking game. In the 3rd set Orkney turned this around and came out with tighter serving and strong smashing to win the game.

3rd Ladies Doubles – Elaine Gray and Moira Nicolson (O) lost to Annette Gear and Jenna McDonnell (S) 21-17, 20-22, 21-14. Elaine and Moira got a good lead in the 1st set and played some magnificent drop shots to take it. The 2nd set went point for point until 21-20 when Annette played a net shot which trickled over for Shetland to take the 2nd set 22-20. Shetland stepped up a gear in the 3rd set with Jenna smashing strongly and Annette driving the shuttle into the backhand corner, making it difficult for the Orkney pairing to return it, seeing Shetland running away with the match.

2nd Mens Doubles – Eion Ballantine and Gary Nicolson (O) lost to Norman Sineath and Liam Flaws (S) 20-22, 21-12, 17-21. The 1st set was close with long hard rallies and could’ve gone either way. The 2nd set saw Orkney finding their form and attacking well. The 3rd set was close until the mid-way mark but a run of unforced errors by Orkney gave Shetland a few points lead that they couldn’t claw back, seeing Shetland win the match.

2nd Ladies Doubles – Christine West and Rebecca Reid (O) beat Audrey Leask and Laura Guthrie (S) 21-17, 13-21, 21-10. Orkney got off to a nervous start and Shetland gained a good lead of 10-2. However, Orkney settled and showed a strong defence, making some fantastic returns off the Shetland smash and they managed to turn the set around to take it 21-17. Shetland recharged and came out with good shuttle placement from Audrey and strong attacking play from Laura. In the 3rd set Orkney showed no fear with Christine and Rebecca combining well and cracking down any lifts. Orkney gained a large lead but Shetland never give up making the rallies long, but it was too late for the Shetlanders to claw back and Orkney took the game.

1st Mens Doubles – Liam Delday and Andrew Reid (O) beat Jason Jamieson (captain) and Graham Keith (S) 21-8, 15-21, 21-18. The Orkney duo got off to a flying start winning the first set convincingly. Jason and Graham recuperated and made life difficult in the 2nd set with great placement of the shuttle turning the game around. The rallies were long and Shetland were moving Andrew and Liam all over the court – making them dive several times to get the shuttle. In the 3rd set Orkney gained a small lead that they never lost. Shetland fought them all the way but Orkney took to the game, much to the delight of the crowd who had enjoyed one of the most exciting matches of the day.

1st Ladies Doubles – Joanne Pottinger (captain) and Emma Work (O) lost to Zoe Anderson and Anne Wood (S) 21-14, 21-12. The game started evenly with the Orkney pairing pushing the Shetlanders hard to get points. Joanne and Emma combined well together, opening spaces and making the Shetlanders move around the court. At 12-11 Anne took control with tight serving and net shots from the front and Zoe smashed anything that came near her at the back. Orkney struggled to break this setup and Shetland showed their class getting a good string of points to take the set. The 2nd set was a similar affair, starting evenly and Shetland then stepping up a notch to take the set. An enjoyable game and good experience for the new Orkney pairing.

6th Mixed Doubles – Rebecca Reid and Magnus Wylie (O) beat Jenna McDonnell Norman Sineath (S) 21-11, 21-17. Orkney started well rarely lifting the shuttle and showed strong attacking play to win the 1st set. The 2nd set was a closer affair but Rebecca’s net kills and Magnus’s speed and power saw them through both sets making it a good 2 set victory for the Orkney side.

5th Mixed Doubles – Moira Nicolson and Matthew Reid (O) beat Laura Guthrie and Andrew Hunter (S) 25-23, 17-21, 21-13. The 1st set went point-for-point the whole way through with long rallies and great spells of play from both sides. It could’ve gone either way at the end. Shetland came into the 2nd set with determination and got a good lead which Orkney couldn’t return from. In the 3rd Orkney took control with great net play from Moira and strong smashing from Matthew seeing them win the match.

4th Mixed Doubles – Emma Work and Liam Delday (O) beat Annette Gear and Rory Irvine (S) 21-14, 18-21, 21-14. Orkney controlled the 1st set with Emma playing nice net shots and handling the back of the court well and Liam attacking the shuttle. Shetland came back in the 2nd set with some fantastic returns and cross court shots which seem to throw the Orkney pairing. Orkney returned in the 3rd set with more consistency and drive putting their opponents under more pressure and took the set.

3rd Mixed Doubles – Christine West and Eion Ballantine (O) beat Anne Wood and Liam Flaws (S) 17-21, 21-19, 21-19. This was one of the most exciting matches of the day and could’ve gone either way. Shetland started strongly with Anne controlling the net and Liam smashing down any lifts. The 2nd set was very even with Orkney placing their shots well to win the set. In the 3rd set Orkney went down 17-11, the game was disrupted slightly here with Orkney winning 2nd mixed on the court beside them. This seemed to inspire Eion and Christine and they clawed back the points until a nail-biting conclusion at 19-20, when Eion smashed the shuttle to the floor off the Shetland serve to win the game. It showed you should never give up when you are several points behind!

2nd Mixed Doubles – Joanne Pottinger and Gary Nicolson (O) beat Audrey Leask and Graham Keith (S) 21-6, 21-19. Orkney flew ahead in the first set with Shetland struggling to return Joanne’s tight serving effectively and Gary cracking down any lifts. Shetland regrouped and came out fired up for the 2nd set. The rallies were hard fought with all 4 players moving around the court. Orkney got the vital point at 19-19 after the longest rally of the set and Gary smashed the shuttle to the floor at 20-19 to take the game. A huge cheer erupted from the Orkney side as they now had the 7 games to lift the cup!

1st Mixed Doubles – Elaine Gray and Andrew Reid (O) lost to Zoe Anderson and Jason Jamieson (S) 21-18, 13-21, 15-21. Orkney’s Open champions got off to a good start, confusing the Shetlanders with great shot placement and taking the 1st set. Shetland returned more motivated, with Jason attacking anything at the back and Zoe’s tight serving and cracking the shuttle down at the net. Shetland took control of the 2nd two sets to win the game.

The final score was 8-4 to Orkney. 9 out of the 12 games were three setters, many of which could’ve gone either way, showing how close it is between the two sides at the moment. Orkney have won the last three fixtures at home however have not won in Shetland since 1972, a record that Orkney will look to break next year! Also, this was another memorable victory because Orkney have won both the Caithness Inter County matches and the Shetland Inter County match this season, a feat that hasn’t been done since 40 years ago in 1977, making this year a very special one for the Orkney side.